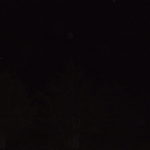 It was a very dark night

A tale of adventure:  We had planned on celebrating the end of a successful season of grassfed beef production, as soon as we loaded our last two British White cattle into the trailer.  But the trucker was late, arriving after dark.  The driver backed into the barn and opened the trailer gate with bright lights illuminating the interior of the trailer in an otherwise pitch black barn.  The heifer was drawn to this novelty and slowly climbed in to check it out.  (We closed the divider gate behind her.) But where’s the steer?  We shone our flashlights into every corner of the barn, until we saw the twisted gate.  Free into the night!  Given the escape route taken, he either turned right and was up a quarter-mile-long dead-end farm road, or he turned left with access to West Shore Road.  We could be up all night!  We jumped into the ATV and tore up the dead-end lane, hoping for the best.  Had we closed all the gates?  The ones leading to the 80-acre north field?  And there he was — looming large in our headlights, but just as quickly stepping outside their focus and floating away like a ghost — a fast ghost.  Quick!  Call for help to close off the West Shore Road access, putting up electric fencing so that there was only one lane, and it led to the barn.  Then out again in the ATV to find our steer and guide him in.  After that, it was easy.  He seemed to want to go back to where he would not be so alone in the dark.  Shakespeare said it best:  “All’s well that ends well.”  We DID get to celebrate.

Life is Good!
Newsletter Archives
FACT national grant award to make our cows even happier!
This entry was posted in Events. Bookmark the permalink.

One Response to Where’s the steer?